Update: the videos I made from the same footage is here.

I’m currently working on a new time lapse project. Not a sort-of-time-lapse. But a true one. To put it short: I’ve had an SLR camera in my window at the same spot for one year. Snapping an image every half hour. Resulting in some pretty nice time lapse videos I’ll post here in a couple of days. But first a still image.

The resolution of the 16 000 images I now have from 2010 are 3888×2592 pixels. So I selected 3888 images snapped during the day. Then I got some generous help from my blog readers and twitter followers. To make a script that would take one line from the first image, the next line from the next image and so on. Jo Christian Oterhals, Nikolai Kristiansen and Aslak Hellesøy provided complete code for the solution.

I used the script from Aslak and made the following image:

It shows one whole year. January at the left and December to the right. You can clearly see that we have a pretty long winter and a decent summer here in Oslo, Norway.

The spring and autumn are both quite short.

It would have been nice to make an interactive version of this image. Where you could mouse over and get info on exactly when the image providing the line was taken. And maybe also bring up a thumbnail of the complete image. Maybe I’ll post all the 3888 images and hope that someone will make a solution like that…

Update:
I have now posted the full 3888 resolution image on flickr.

Light and timing are some of the most important factors in an image. I have huge amounts of images snapped at the exact same spot. With the exact same focus point and the same f-number. The only thing that have changed is the season and the light. Bringing diversity like this: 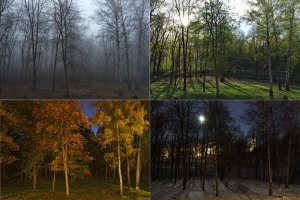 But now I have some amazing videos to finish… 🙂

One year in one image